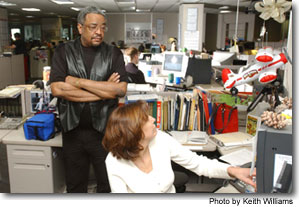 It isn’t often that I call someone the dean of some industry or group of people. The word doesn’t always fit. But I have to say that upon hearing about the retirement of Bennie Ivory, executive editor of the Louisville Courier-Journal, Bennie Ivory is the dean of the club of people who are or have been executive editors of daily  newspapers, especially Gannett newspapers.

Bennie is leaving — Friday. Yes, that’s quick, this coming from a woman whose own retirement from a Gannett newspaper, went on probably a bit too long. I was trying to be kind by giving my bosses time to recruit a successor. Too long, I now know.

Bennie is a dean of our industry. He served long and well as a leader at several newspapers, including Florida Today, the Wilmington (Del.) News Journal and in Louisville. I met him in 1986, right after I arrived at  USA Today, my first Gannett newspaper. Bennie was on the way out to some great adventure to lead a newsroom as managing editor. I was just starting my first top management role as a deputy managing editor at USA Today.

Here’s what I remember about Bennie Ivory:

I expect we will keep hearing from black-wearing, thoughtful, talented Bennie Ivory. I expect he will continue to make Louisville his home. I expect he will get some rest for a time and then find a way to share his wisdom in a place where it matters.

Author of Coming Full Circle: From Jim Crow to Journalism. A retired newspaper editor and a former associate professor/ former chair of the Department of Journalism and Mass Communications at Savannah State University, Savannah, Georgia. She has a passion for writing, editing and inspiring the next generation.

BLOG: Musings of a Savannah Girl